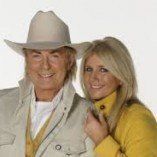 They decided to leave England and move to Holland to concentrate all their efforts into making records and touring Europe, their biggest hit’s during this period were, ‘Your my World’ and ‘You don’t have to say you love me’ . In 1981 Martine Howard left the group and for a while Julie’s Sister, Laura, stepped in, until they found a permanent replacement who turned out to be Rosie Hetherington, during the next six or so years they recorded several Albums and countless hit singles such as ‘Broken dreams’, ‘I got the fire in me, ‘I heard it on the radio’, ‘I feel like crying’….ect….. ect….. The group had been constantly touring but in 1985 Paul & Rosie decided they wanted to stop, this was a sad time as they were all good friends but life goes on and Julie & Dominic decided to go it alone as a duo. Their friend and Producer at the time, Richard De Bois, suggested to them that they should call themselves by their names (as people knew them in the Group as Dominic Grant and Julie Forsyth), so ‘Grant & Forsyth’ was born!

The first couple of years were a struggle but in 1988 things changed & proved to be a defining year for Grant and Forsyth when they made their first mark on the charts with a hit recording of the Walker Brother’s classic ‘The sun ain’t gonna shine anymore’, mixed with The Ronettes ‘Be my Baby’. Julie also found success as a song writer, writing a song called ‘Go’ which came second in the Eurovision Song Contest, sung by Scott Fitzgerald, losing by one point to the Swiss entry, sung by the then unknown Celine Dion.

1990 was the turning point. The first album, Country Love Songs’ went platinum in Holland; this huge success was followed by a string of ‘Country Love Song’ albums all of which earned gold & platinum status. To date, Julie & Dominic have sold over 3 million albums in Holland alone making them the most successful husband and wife team in Europe. During this period they had the pleasure of meeting up with Johnny Cash.

Get our latest update via email